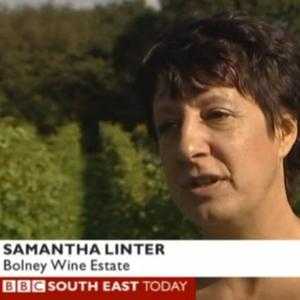 The Brits love to talk about the weather and for this campaign it played a bigger role than usual. It was a warm spring which brought on early flowering for the vines but just as they came into blossom we had heavy rain. This meant the vines suffered ‘millerandage’, whereby a small number of grapes on the vines did not mature as they should have. The result was a reduced grape harvest but a higher concentration of fruit and sugar leading to more complex aromas and flavours.

FML wanted to make sure that Sam from Bolney Wine Estate was first with the news as we all know that the early bird catches the worm. So we set about briefing our key contacts from the local and national media.

Once the word was out and Sam was quoted we went back to the same contacts a few weeks later with updates as the start of the harvest was fast approaching. Once the harvest was underway the media were well and truly briefed and the story went far and wide.

BBC South East Today and BBC South carried the story on the 13th September, airing it on all the news programmes. Repeats were aired on BBC South East on the 19th Sept every half hour on the news bulletins. Two live broadcasts took place on BBC Radio Sussex from the vineyard on the first day of the harvest and Bright FM covered the story later that week. Local print and online media gave widespread coverage including the Mid-Sussex Times and The Leader. And The Daily Telegraph sent a photographer to catch pickers at work and that story went online to its 40 million unique users.